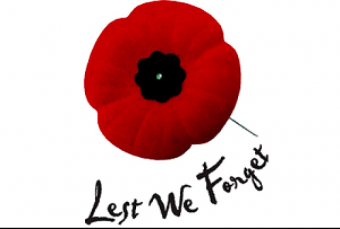 Remembrance Day marks the anniversary of the official end of World War 1 hostilities. A two minute silence is observed at 11am on the 11th day of the 11th month to mark the date and time when fighting stopped. Government buildings fly the Canadian flag to remind us of those who fought for Canada.

It is a day to commemorate the members of the armed forces, to honour the fallen, and remember all those who served to defend our Nation. Many lives were lost, injured, psychologically traumatized and forever changed. As a peace keeping nation, we strive toward a future without war.

Poppies are worn as a symbol of respect and support for all those who served. Originally, lapel poppies were made by disabled Canadian veterans, but since 1996 they have been commercially manufactured. They are worn on the left lapel, generally from the last Friday in October to the end of the day on November 11th , after which they should be placed at a memorial for veterans.

The famous poem titled In Flanders Fields is recited at Remembrance Day Services. It was first published in December 1915 and was written by Lieutenant John McCrae, a teacher and military doctor who served in World War 1.

In Flanders fields the poppies blow
Between the crosses, row on row,
That mark our place; and in the sky
The larks, still bravely singing, fly
Scarce heard amid the guns below.

We are the Dead. Short days ago
We lived, felt dawn, saw sunset glow,
Loved and were loved, and now we lie
In Flanders fields.

Take up our quarrel with the foe:
To you from failing hands we throw
The torch; be yours to hold it high.
If ye break faith with us who die
We shall not sleep, though poppies grow
In Flanders fields.

Our best referral is yours... and we thank you for taking the time to share our website.

The festive season is special. Dressing up, sharing a nice meal and enjoying each other's company outside of our Lorne Park Dental office is something we love doing at this time every year. Do you recognize us without our scrubs, masks and gloves?

Silver Diamine Fluoride (SDF) is a non-invasive treatment option for some cavities that uses a liquid medicine that is painted on the tooth instead of a drill and fill approach. Our Lorne Park Dental team is always looking for ways to improve how we do things in order to benefit our patients. We're excited to be using this treatment in our office.

Keep your smile healthy and bright! Book an appointment with Lorne Park Dental.